Listening to variations on a theme is one of my great musical pleasures. I remember the original notes and am fascinated by how they change. The comfort of the old plays with the excitement of the new. Sometimes I am amazed by how much more can be said about something I already know. Sometimes I am more impressed by the many different aspects of one message.

This posting is about two of the most popular themes in Classical music and their variations. Be forewarned: such catchy tunes may stay in your head for a while.

Western music often uses a bass line to set the rhythm and to determine the chord progressions. In much of Renaissance and Baroque music the same bass line repeats throughout the piece. The melody is played (and widely varied) in the higher registers while the basso ostinato (stubborn bass) continues in the lower. The meaning is in the high notes, the rhythm in the low. The idea of the “tenor” as the voice that “holds” the melody can also describe the main line of thought in spoken or written communications.

In some ways, this type of music is very similar to the way we speak. The fundamental of the voice is determined by the vibrations of our vocal cords. These vibrations continue throughout our speech. They provide a basic pitch and their on-and-off rhythm determines the cadence of our speaking. The meaning of the speech is then determined by modulating the higher harmonics of the sounds to give consonants and vowels.

The ground bass is the underlying structure of such forms as the Chaconne, the Passacaglia, the Folia and the Sarabande (Ross, 2010). It provides a stable rhythmic and harmonic structure for the melody to play upon. Many of these musical forms came into prominence in the Iberian Penninsula in the 15th and 16th Centuries. Some likely derived from medieval folk tunes. Some may have arrived from the New World or the Canary Isles.

Diego Ortiz (1510-1570), a composer in the Spanish court, wrote several ricercadas based on La Folia (1553). A ricercada is a form of variation, often using several melodies, and sometimes playing these together in a fugue. The following is the eighth ricercada, played by Jordi Savall and his colleagues:

The most common of the chordal progressions built on the bass line of La Folia is in D minor, as illustrated in the following example (from Campenon & Rustique, 2012) which has a very simple melody in the upper register:

The 16-bar chord progression is 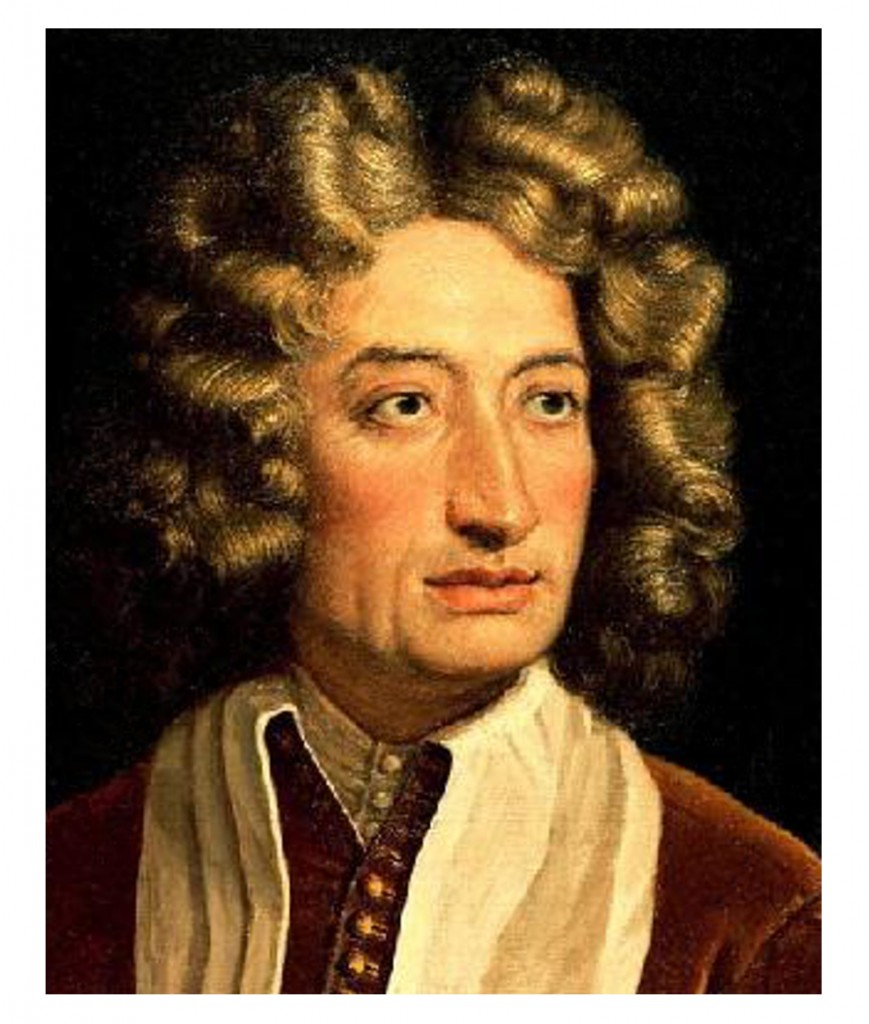 The most famous piece of music to use this progression is the Violin Sonata XII of Opus 5 (1700) of Arcangelo Corelli (1653-1713), an Italian composer working in Rome. The following is the beginning of the sonata played by Andrew Manze (violin) and Richard Egarr (harpsichord):

This is the first page of the sheet music: 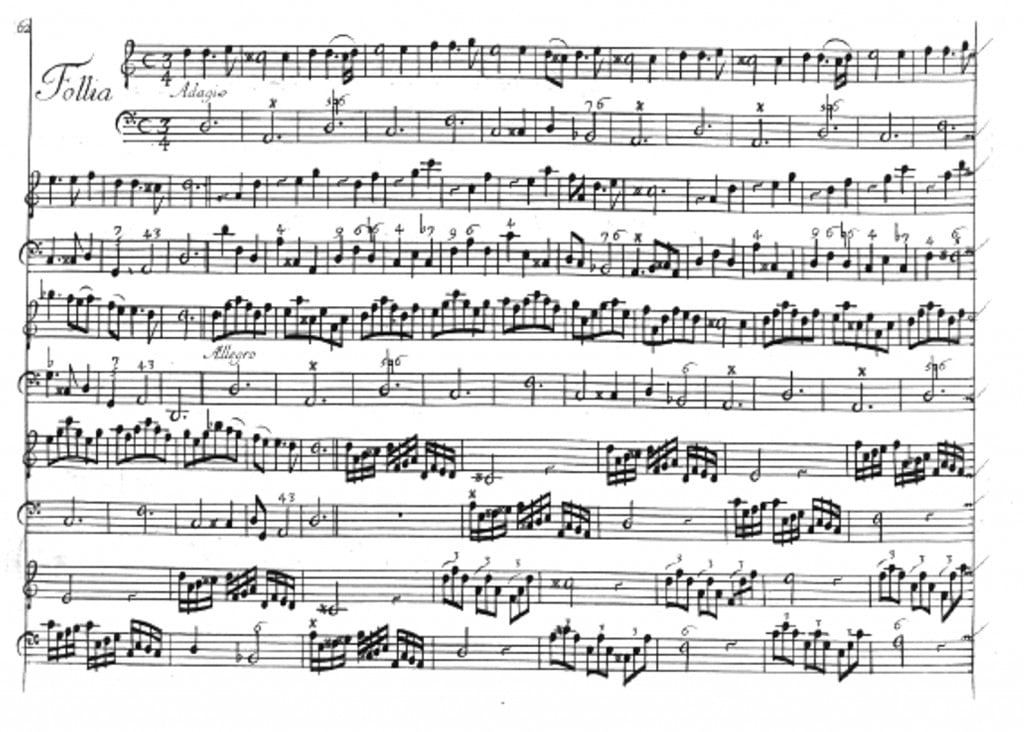 Corelli’s sonata was immensely popular. One of his pupils, Fancesco Geminiani (1687-1762) arranged the sonata for a string orchestra in 1726, while he was composing and teaching in London. London was quite taken with La Follia. The following selection is the latter half of the Geminiani adaptation as played by Les Violons du Roy under the directions of Bernard Labadie.

In the years after Corelli, the theme of La Follia was widely used by many different composers in many different contexts. The internet hosts a great website on Corelli (Campenon & Rustique, 2012), and a truly magnificent website devoted to La Folia in all its manifestations. 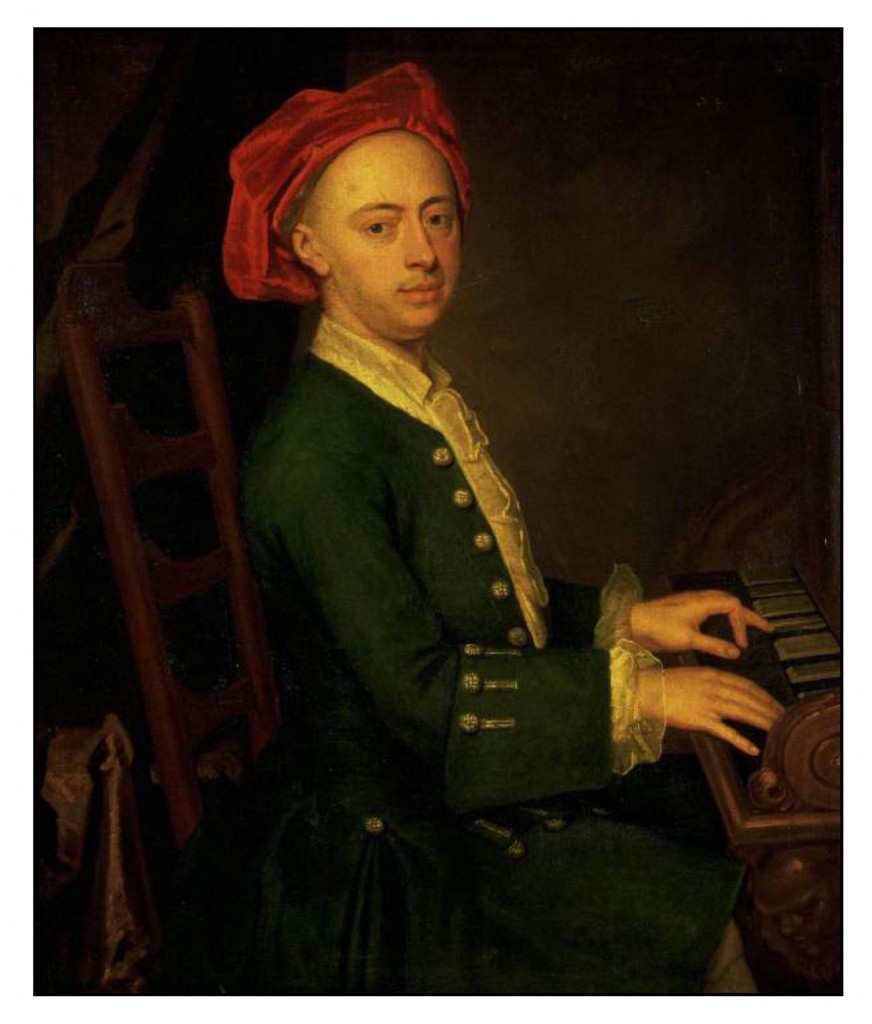 While in London, Geminiani’s violin-performances were often accompanied by George Frideric Handel at the harpsichord. In 1733 Handel published his Suite No. 4 in D minor for Harpsichord (HWV 437). One of its movements is a Sarabande, a stately dance in three-quarter time (Hudson & Little, 2016).

Handel’s Sarabande uses a 16-bar progression similar to that of La Folia:

Compare this to La Folia:

Though similar, it is clearly not the same. However, as the webpage on La Folia, states “this piece breathes the same atmosphere, and most likely Handel had the Folia-theme in mind when composing this Sarabande.” Indeed the movement became known as “Handel’s Folia.”

The following is the beginning of the Sarabande played by Alan Cuckston:

Together with the sheet music for the theme: 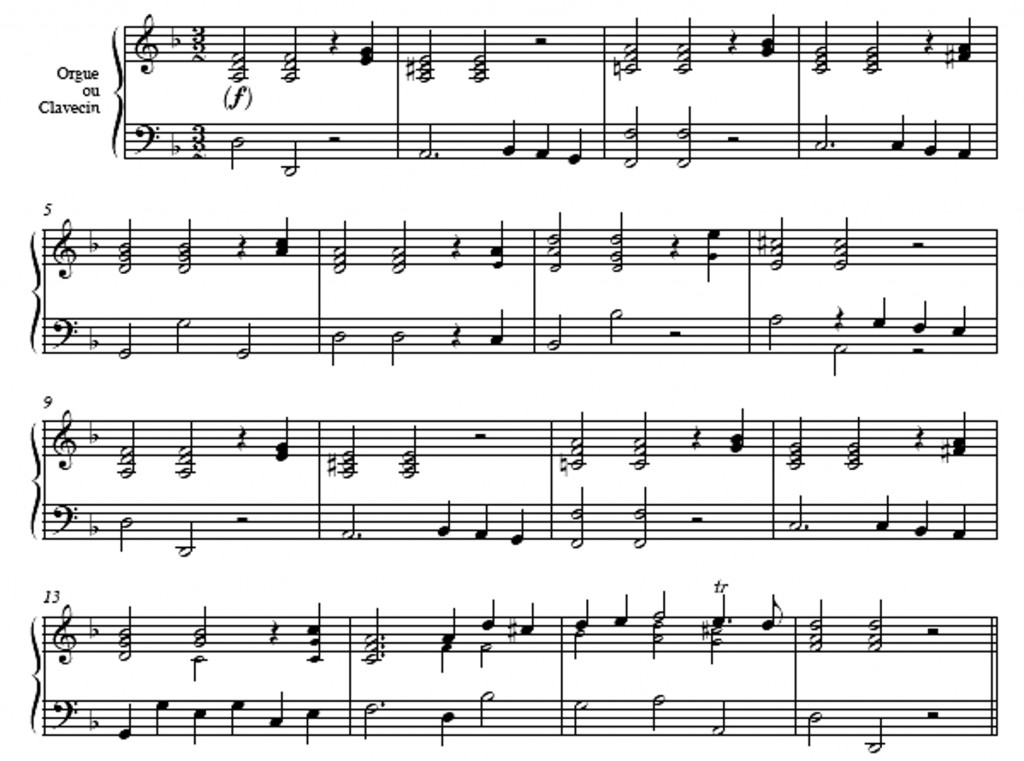 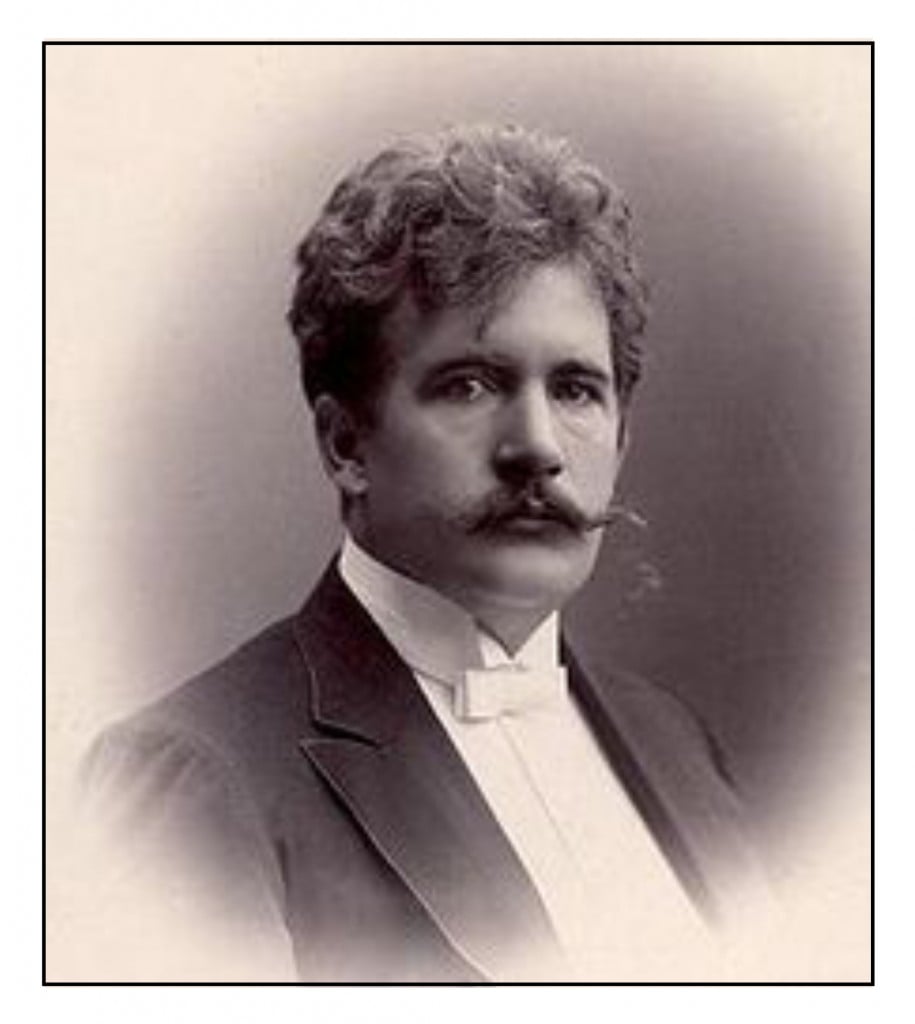 In 1897, The Norwegian violinist and composer Johan Halvorsen wrote a lovely series of variations on Handel’s Sarabande for violin and viola. Halvorsen’s virtuosity as a violinist was only matched by the elegance of his moustache. The following is the beginning of his variations as played by Natalia Lomeiko (violin) and Yuri Zhislan (viola): 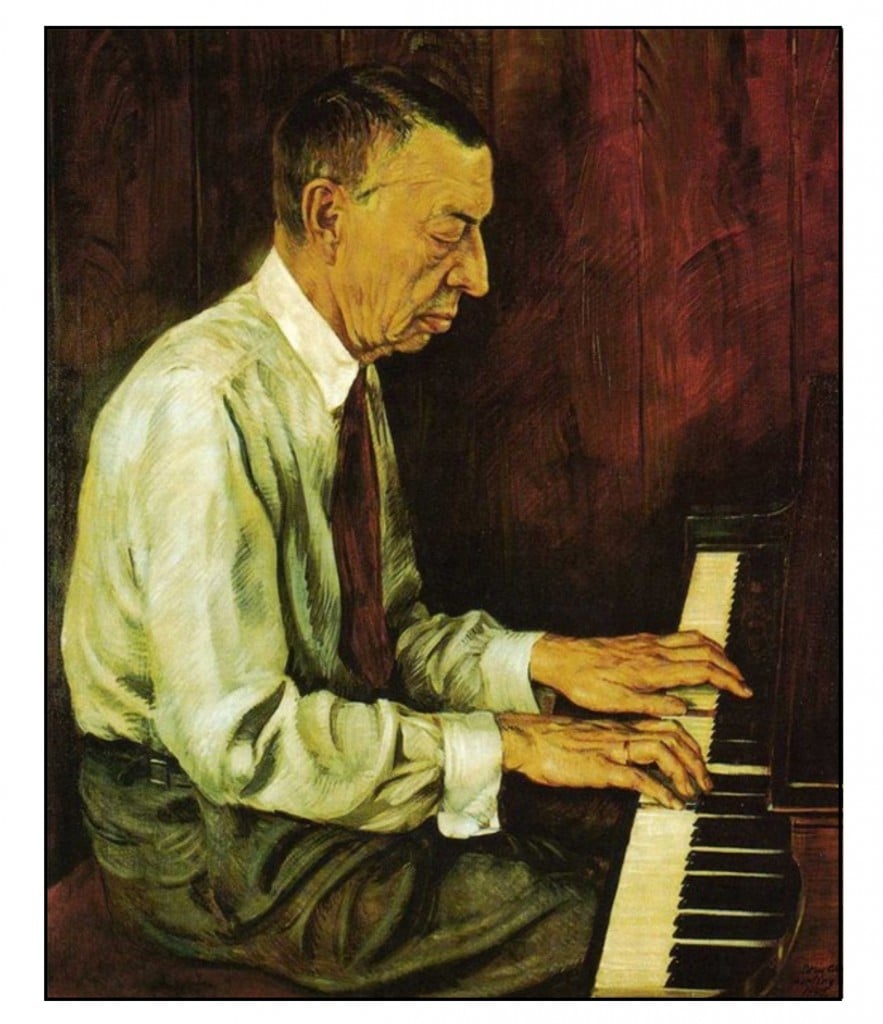 In the 20th Century the popularity of La Folia increased. In 1929 Manuel Ponce wrote a set of guitar variations for Andre Segovia. And in 1931, Sergei Rachmaninoff (1873-1943) wrote a bravura set of piano variations on La Follia. In the following clip, Mikhail Pletnev plays the theme and first seven of the twenty variations:

I shall conclude this posting with the main title theme from Stanley Kubrick’s 1975 film Barry Lyndon: Handel’s Sarabande as arranged for the National Philharmonic Orchestra by Leonard Rosenman. The movie is characterized by stunning photography, with many of the indoor scenes lit by candles. (I have appended a still photograph of the opening scene.) The music is perfectly chosen to represent the time and the place. The film won Academy Awards for both Cinematography and Musical Score. 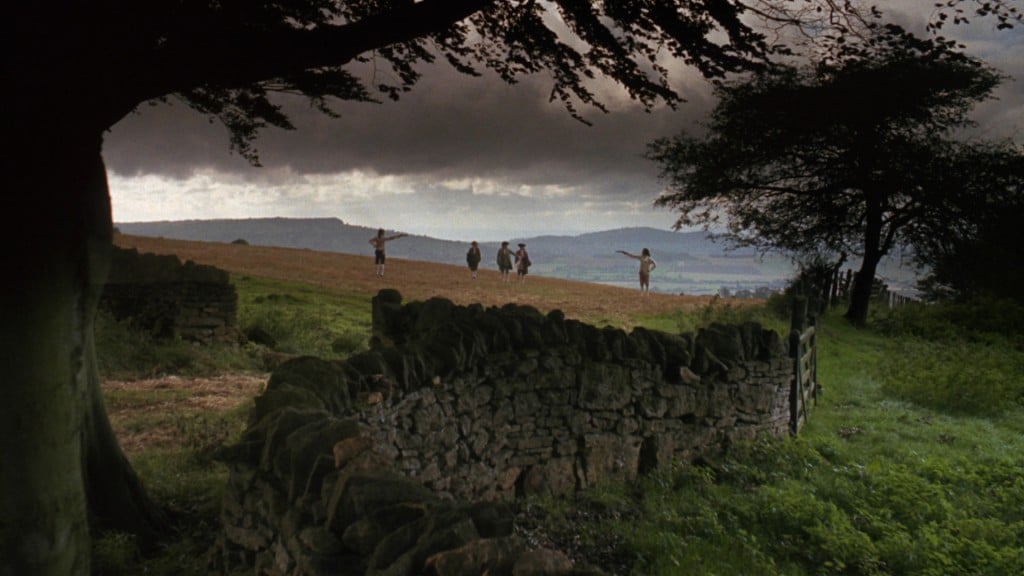