The genre of painting known as “still life” deals with our perception of the natural world. As such it has much in common with the empirical sciences.. However, whereas the scientist analyses the world, the artist tries to recreate it.

The still-life artist selects and arranges what will be depicted. If landscape is observation, then still life is experiment. The view of the world typically includes artificial as well as natural objects. More often than not, the arrangement of the objects provides a moral meaning, typically one related to transience or “vanity.” The still-life painting thus comments on both the nature of reality and the process of creation.

The English word “still” means both “unmoving” and “persistent.”  In French, the term nature morte accentuates the idea of mortality. In Spanish, the term bodegon means “pantry.” Spanish still-life paintings represent the food, drink, jars, plates and utensils that may be found in a pantry.

In classical Greek the term was xenia. This generally concerns strangers but in this context it has to do with the hospitality relationship between the guest (stranger) and the host. A good host orders the world for the comfort and pleasure of the guest. In his book Imagines (“Pictures”), Philostratus describes a still life of cherries in a basket, pointing out that the basket is woven from the twigs of the cherry tree. The artist has added a backgroudn narrative to the perceived world. Though the painting’s cherries cannot provide real sustenance, their representation can provide pleasure. We can revel in the meanings. The picture emphasizes “the elaborate changes of ontological register as images pass between different levels or degrees of reality, away from a primordially-given real and towards an increasingly sophisticated set of fictions-within-fictions.” (Bryson, 1990).

The Dutch and Flemish paintings of the seventeenth century are magnificent creations, both in terms of how the artists set up their scenes and how well they were was able to represent them. The painting of Still Life with Strawberries and Cherries (1658) by Jan Janz. van de Velde III is in the Daisy Linda Ward Collection at the Ashmolean Museum in Oxford (Meijer, 2003). This collection of almost one hundred paintings is displayed in one room, wherein the viewer can contemplate art and transience to the heart’s content. 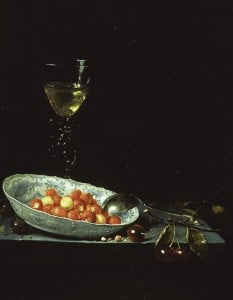 A high window on the left is indicated by the multiple reflections from the Venetian wineglass. Light scintillates off the complex stem of the glass outlining its form. On the table an imported porcelain bowl contains ripening strawberries. Dutch art pays homage to Chinese culture. Though the surface sheen of the porcelain is deftly represented, the shape is imperfect: the real bowl must have been more exactly circular and the scallops on the edges more evenly spaced. A few cherries and some pits are scattered on the table top. Two cherries hang over the edge to convince us of both reality’s three dimensions and art’s two. The upper right of the picture is dark. Nothing can be seen. The objects lay their claim to the light, and insist upon existing.

In his poem Still Life in Milford, Thomas Lynch touches on the different aspects of still life (Lynch, 1998).  The poem is an example of ekphrasis, a work of art about a work of art, typically a literary description of a painting or sculpture. Lynch’s poem describes a 1965 painting by Lester Johnson. The painting represents a bucket of flowers on a table, together with a vase to arrange them in and the artist’s pipe smoldering in an ashtray. Lynch thinks that the pipe might “suggest the artist and impending action.” It might also be an allusion to Magritte’s 1928 painting Le Trahison des Images (“The betrayal of the images”), wherein a picture of a pipe and the words Ceci n’est pas un pipe (“This is not a pipe”) call into question the very idea of representation.

Lynch’s poem plays with all the meaning of the word “still” – without motion, without sound, without stopping, but most of all with the sense of “nevertheless” (without submission). It ends with a meditation on artistic creation:

Still Life in Milford seems a parable
on the human hunger for creation.
The flowers move from bucket to vase
like moving words at random into song –
the act of ordering is all the same –
the ordinary becomes a celebration.
Whether paper, canvas, ink or oil paints,
once finished we achieve a peace we call
Still Life in Milford. Then we sign our names.