On August 22, 1938, the Nazi government revoked the permits allowing Polish Jews to live in Germany. Between September 27 and 29, 12,000 Jews were deprived of their possessions, transported to the Polish border, and left there without food or shelter. Polish officials allowed them across the border, even though many no longer possessed Polish papers. The Jews were housed in makeshift accommodation in the town of Zbaszyn. They were hungry and desperate. 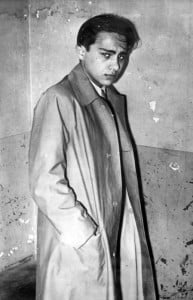 Among the expelled Jews was the Grynszpan family from Hannover. Esther Grynszpan sent a postcard asking for help to her 17-year-old brother Herschel, who was staying illegally with relatives in Paris. Herschel received his sister’s postcard on November 3. On November 6 he tried to convince his uncle to send money to Poland to help his family. A violent argument developed, and Herschel stormed out into the night.

The next morning Herschel bought a revolver, and went to the German Embassy. He claimed to have important documents to submit to an embassy official, and was ushered into the office of Ernst vom Rath, a 29-year-old diplomat. A few minutes later, Herschel shot vom Rath in the stomach. Herschel was taken into custody by the French police. (The photograph shows him at the time of his arrest.) Vom Rath was taken to hospital where he died two days later on November 9.