Point of view is an essential concept in both philosophy and art. In philosophy, point of view highlights the problem of conscious experience. To understand the consciousness of another individual we must be able to experience that individual’s point of view. This may be partially possible among individuals of the same species and culture. Yet, as Thomas Nagel (1974) points out, this becomes next to impossible when the individuals use different perceptual processes. Bats determine where things are in space by perceiving the echoes of their own ultrasonic sounds. We can track the sounds as they are emitted and received; we can record the response of the bat’s neurons to these sounds; yet we will never really understand what it is like to be a bat.

Conscious experience is particular to the perceiving individual, and is inaccessible to another. Imagination allows us to hypothesize what it might be like, but the hypothesis cannot be tested. Nagel uses the term “ascription” rather than “description:”

There is a sense in which phenomenological facts are perfectly objective: one person can know or say of another what the quality of the other’s experience is. They are subjective, however, in the sense that even this objective ascription of experience is possible only for someone sufficiently similar to the object of ascription to be able to adopt his point of view—to understand the ascription in the first person as well as in the third, so to speak.

In art, point of view describes the perspective of the artist. Perspective is a set of conventions whereby an artist communicates his or her experience to another. Since the Renaissance, perspective in Western painting has used a set of geometrical rules for portraying the location and orientation of objects in space (D’Amelio, 1964). The main techniques involve visual horizons and vanishing points. The following illustration shows a set of colored steps in two-point perspective, together with their perspective guidelines.

Painters combined geometric perspective with other rules concerning shading and texture to represent reality. The Impressionists portrayed the colors of the light reaching the perceiver at every point of the visual field. Some paintings, such as those of John Frederick Peto in this website’s banner, were so successful that they became illusions of reality.

Towards the end of the 19th century artists rebelled against this approach, leaving photography to take over the role of realistic representation. Paul Cézanne became more concerned with the underlying form of what existed than with its sensory qualities. He simplified the planes and colors of what was visible so that the structure of the world could be perceived.

Inspired by Cézanne, Picasso and Braque began to push the limits of such formalism, founding a movement that came to be known as Cubism. The name came from the idea that reality might be simplified into cubes, but this is only one of many possible techniques for demonstrated structure. Outlines became prominent: Cubist paintings presented working diagrams of reality rather than mirror images (Berger, 1969). Shading was used was accentuate the outlines rather than to give the illusion of three dimensions. Transparency allowed one structure to be seen through another: foreground and background came together on the plane of the picture in a process called “passage.” Multiple different perspectives could be presented simultaneously: there was no longer any single point of view (Kahnweiler, 1920). The following illustration shows two of Picasso’s paintings of a guitarist, one before (1903) and one after (1910) the beginning of Cubism: 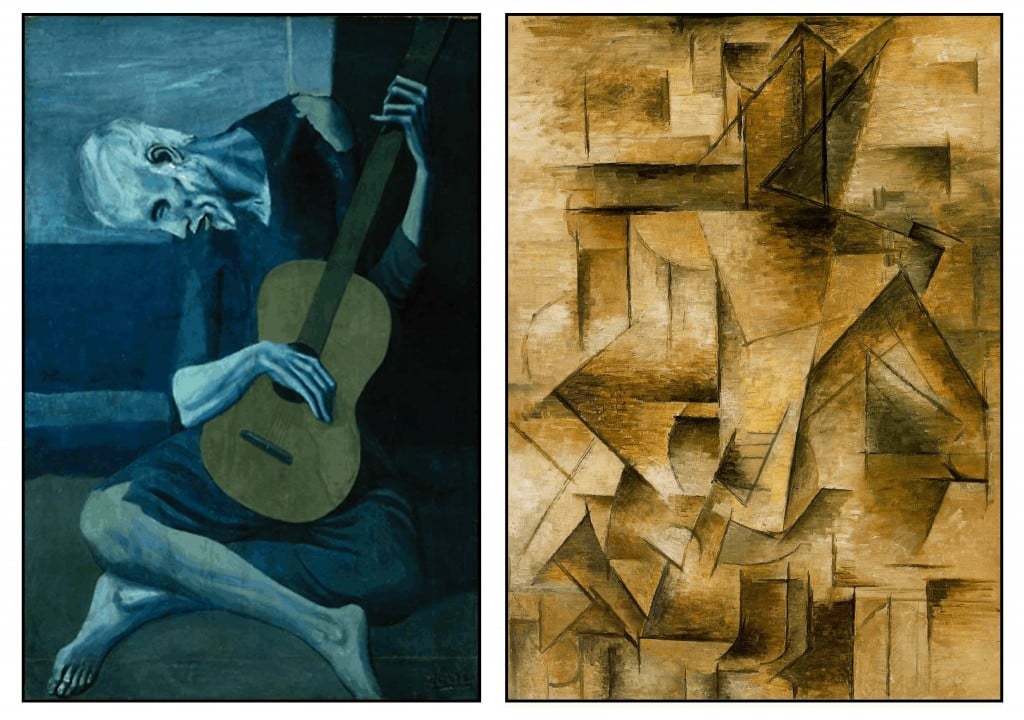 In the Cubist painting, the only details that suggest what is being represented are the curves and frets of the guitar. Once the viewer knows what to look for, the rest of the painting can perhaps be related to the general form of the guitarist, but this is an intimation of reality rather than an understanding. The picture is almost abstract. Other painters soon followed this path, removing ties to the visible world and creating representations of what cannot be seen.

Cubist paintings continued to represent the visual world but the representations became more and more complex. The following illustration shows a painting in the Cleveland Museum of Art that represents a still life with a glass, bottle, carafe, fork and knife arrayed upon a table. However, although the painting is diagrammatic, the viewer still needs an explanatory diagram (by Henning, 1972) to see what is being represented: 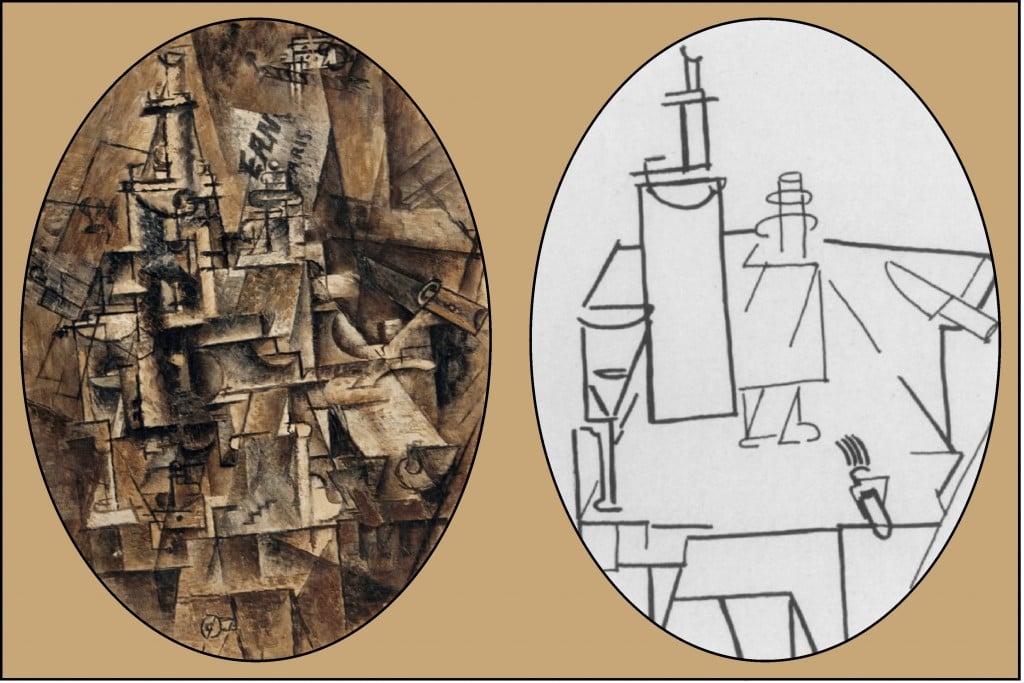 The intent of Picasso and Braque was to make painting objective rather than subjective. However, their approach came to naught. Their paintings became cluttered, idiosyncratic and incomprehensible. Some hold on reality was gained by adding illusionistic details, such as the pipes in cubist portraits, but this merely accentuated the lack of meaning in the rest of the painting. By 1912, Cubism had come to demonstrate what T. J. Clark (1999, p. 191) has called “the failure of representation.” The paintings did not communicate.

The movement changed towards a simplification rather than shattering of forms, and a return to color and texture. Synthetic Cubism became far more successful than the initial analytic version and has persisted in some form to the present. One of the masterpieces of Synthetic Cubism is Picasso’s 1921 painting of Three Musicians in the Museum of Modern Art. All three wear masks. The clarinetist dressed like Pierrot likely represents the poet Guillaume Apollinaire who died in the flu pandemic in 1918. The guitarist in the garb of Harlequin is Picasso. The vocalist on the right in the robes of a monk is Max Jacob, a Jewish poet who had just experienced mystical visions and had entered a monastic retreat. The musicians perform with a disjointed dog at their feet in a small room of doubtful perspective. The image of each musician spreads to becomes part of the others. The painting has a richness of meaning that contrasts with the aridity of Analytic Cubism. 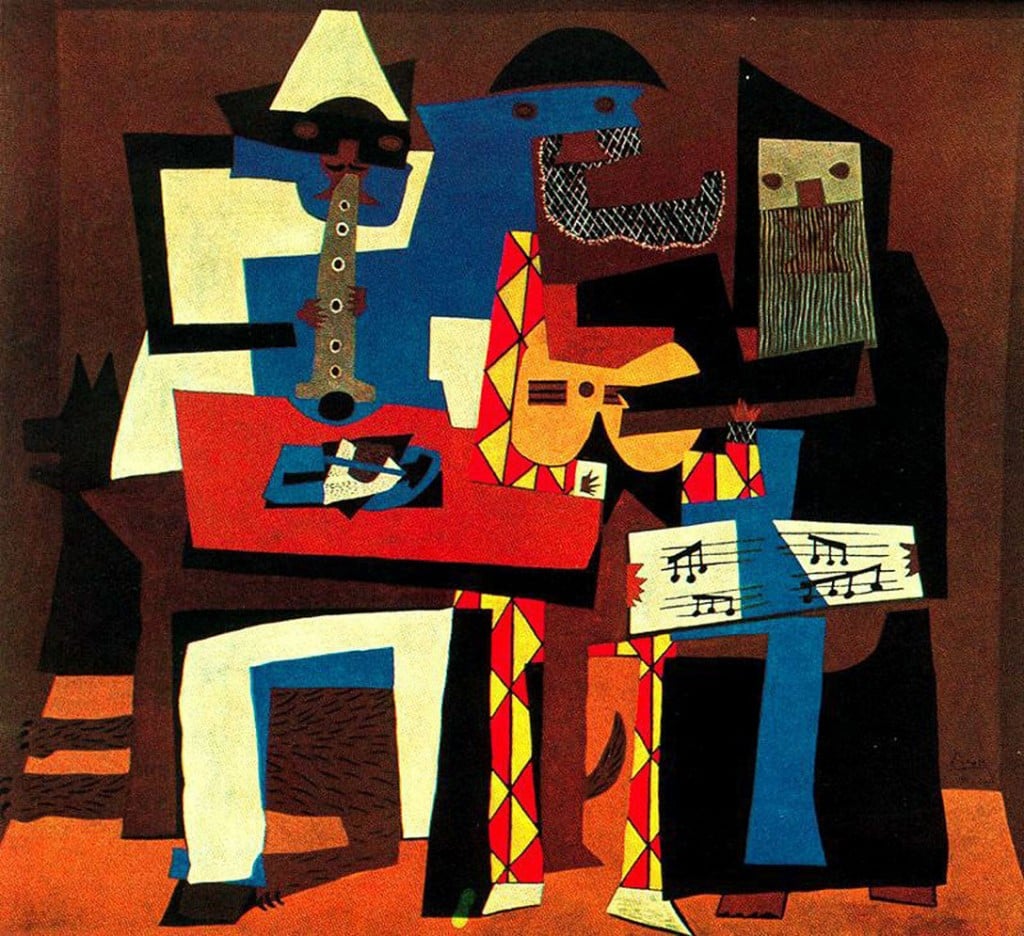 The painting is joy to behold. It represents the pleasure of phenomenal experience: the sounds, the colors, the people. These experiences justify the evolution of consciousness:

The survival benefits of delighting in “existence” are obvious. For a start, any creature who has it as a goal to indulge its senses in the kinds of ways described will be likely to engage in a range of activities that promote its bodily and mental well-being (even if occasionally at some risk). Such a creature will do life well, we might say. (Humphrey, 2011, p. 87)

With the development of memory and thus the ability to extend consciousness over time, general awareness leads to “individuation.” (Humphrey, 2011, Chapter 9, pp. 135-146)  The phenomenal experience becomes linked to a self that persists from past to future. We develop a single point of view. Nevertheless, this individuation depends on social interactions: an individual needs others to be separate from.

Unfortunately, an individual point of view lasts only as long as the individual. One way to escape this mortality might be to dissolve the individual into some more universal consciousness. This is the goal of many of the Eastern religions: the attainment of wisdom through the loss of self.

In the Tevijja Sutta, the Buddha discusses how this might be done. The truth is not found by looking for it, but by living one’s life in the right way. Trying to understand the truth is like building a set of steps for a building when we do not know even where the building is. Better to follow the eightfold path, to attune oneself to the truth rather than attain it.