The art and architecture of the Byzantine Empire is justly famous. Buildings such as the Hagia Sophia taught the world the use of space; the mosaics of Ravenna, Venice and Palermo gave the Christian religion its iconography. This is the Byzantium of Yeats’ poem Sailing to Byzantium (1927)

O sages standing in God’s holy fire
As in the gold mosaic of a wall,
Come from the holy fire, perne in a gyre
And be the singing-masters of my soul.

A common view of the early Renaissance in Italy is that it adapted the mosaic images to the new techniques of fresco and panel paining. Painters such as Cimabue and Giotto “transformed ” the static, flat Byzantine style by adding the realism and movement of late Roman art – thereby translating painting from Greek into Latin (to use a phrase from Cennino Cennini). The images became more real and natural. Three dimensions were suggested by shading and by perspective. Both the artist and the model asserted an individuality that went beyond the limits of the orthodox. Most importantly the new images both portrayed and evoked emotions.

Yet these developments were not unique to Italy (Grahan Dixon, 1999). Similar images were being produced in the surviving regions of the Byzantine Empire. Movement and corporality was represented in Byzantine paintings long before it was seen in Italy. Unfortunately, much of late Byzantine painting did not survive the Ottoman occupation of Eastern Europe. Those paintings which still exist have been poorly conserved. Any photographs are of poor quality. Despite these problems, it is clear that the artists of the late Byzantine Empire contributed  much to the onset of the Renaissance. Three pairs of images illustrate the relations between late Byzantine and early Renaissance.

The first is a pair of paintings of the Annunciation. Both are trying to break out from the earlier conventions of flatness and immobility. The painters exercise their freedom in different ways. The Byzantine icon illustrated above comes from Orhid in Bulgaria. It was probably painted in Constantinople in the early years of the 14th century.  Though Mary maintains a stylized universality, the Angel Gabriel is full of motion and individuality. The icon shows an appreciation of perspective though this is not the perspective we have become used to. Instead of converging on a vanishing point, the lines of perspective radiate outward, leading the viewer into the image (Grall, 2008). 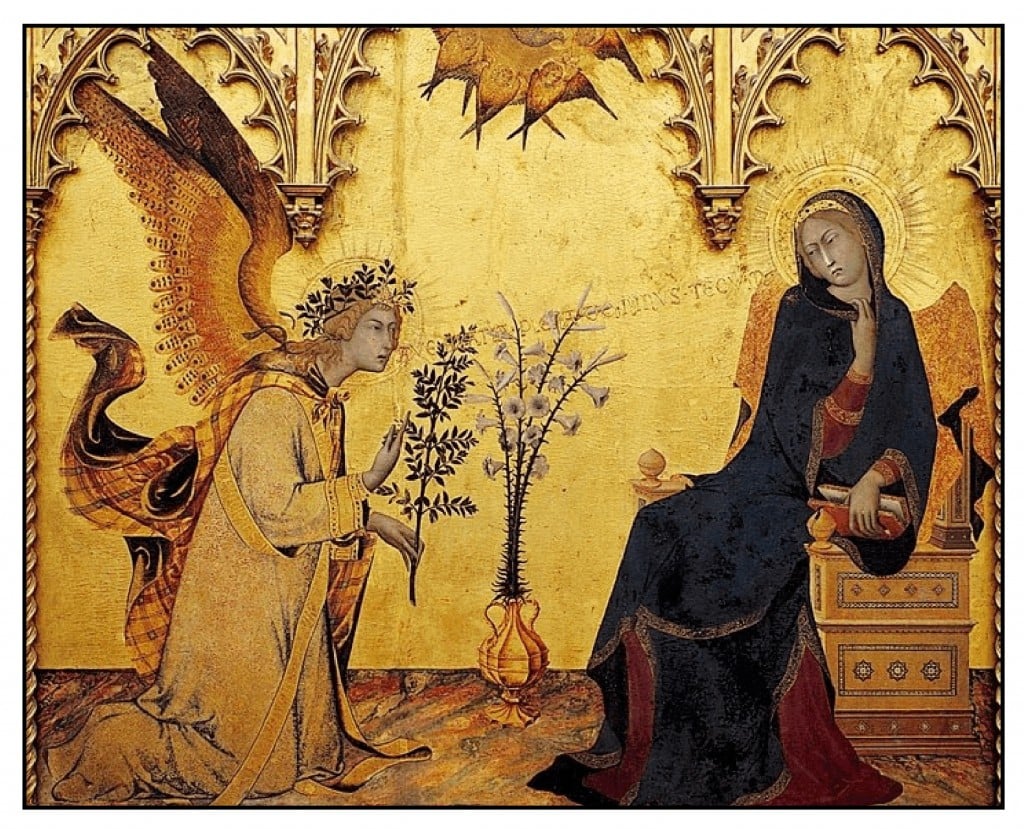 The Italian image of the Annunciation (above) was painted by Simone Martini in 1333 in Siena. The perspective remains almost completely flat. However, the image of the reticent, anxious and uncertain Mary is one of the great achievements of early Renaissance or late Gothic art. She demonstrates a highly individual response to the Angel’s announcement of “Ave (Maria) gratia plena dominus tecum” – Hail (Mary) full of grace, may god be with you. – which hangs in the golden air. 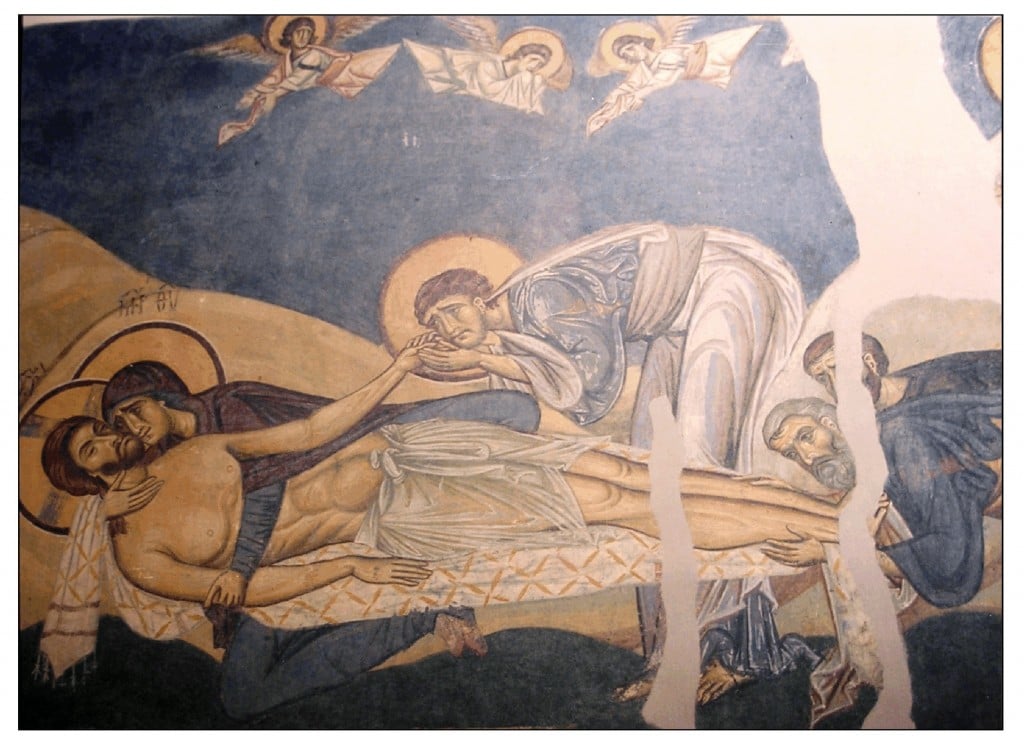 The next pair of paintings portray the Lamentation. The iconography is so strikingly similar that one of the painters must somehow have been aware of the others’ work. The Byzantine image (above) is from the Church of Saint Panteleimon in Nerezi in the Republic of Macedonia. Mary cradles the body of her son between her legs, almost as though she is giving birth rather than lamenting death. 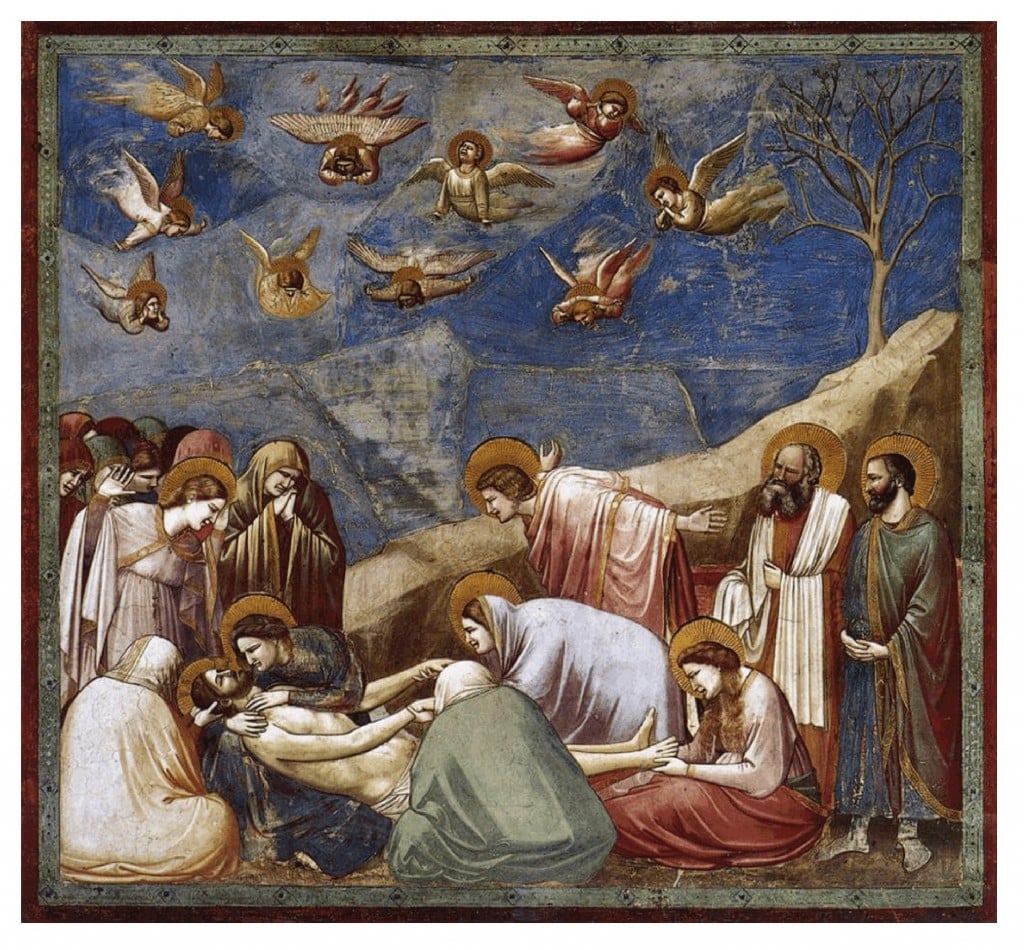 The Italian fresco was painted by Giotto di Bondone in the Arena Chapel in Padua. The grief of the family and friends of the dead Christ is echoed by the angels who survey the scene from above. The figures in Giotto’s painting are more natural than in the Byzantine painting. Their emotions are more sublime than raw.

One might easily think that the Byzantine image was based somehow on the famous Italian fresco. Made more acute in its design and in its passion. However, the Nerezi fresco actually predates Giotto’s work by more than a century:  1164 versus 1305 CE. Giotto must have based his painting on some memory or description of the Byzantine work.

A final comparison involves several paintings of the Nativity. All use the same iconography. Mother Mary rests after the birth; Jesus sleeps in the manger beside her; humble animals stand nearby; above the stable, the angels celebrate the birth; the shepherds come to worship; Joseph sits by himself in wonderment.  As well as sleeping, the infant Jesus is also shown being bathed by midwives. This iconography has a long tradition in Byzantine art. The following examples are an illustration from the Menologion (Church Calendar) of the Byzantine Emperor Basil II from around 1000 CE: 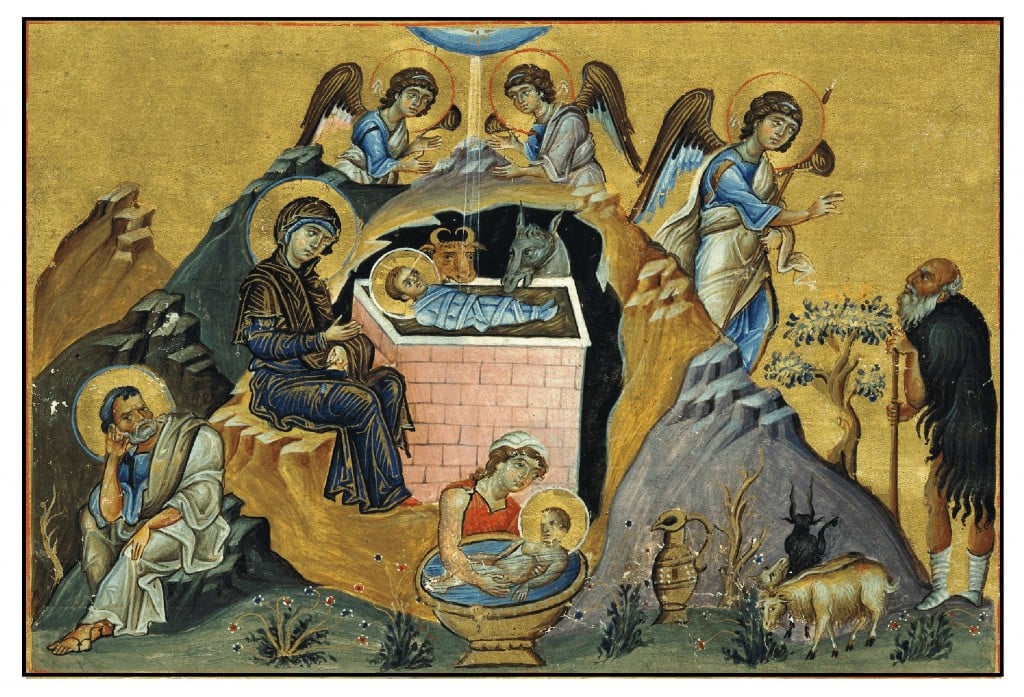 and a mosaic in the Palace Chapel in Palermo made by Byzantine artists in Sicily around 1150 CE. 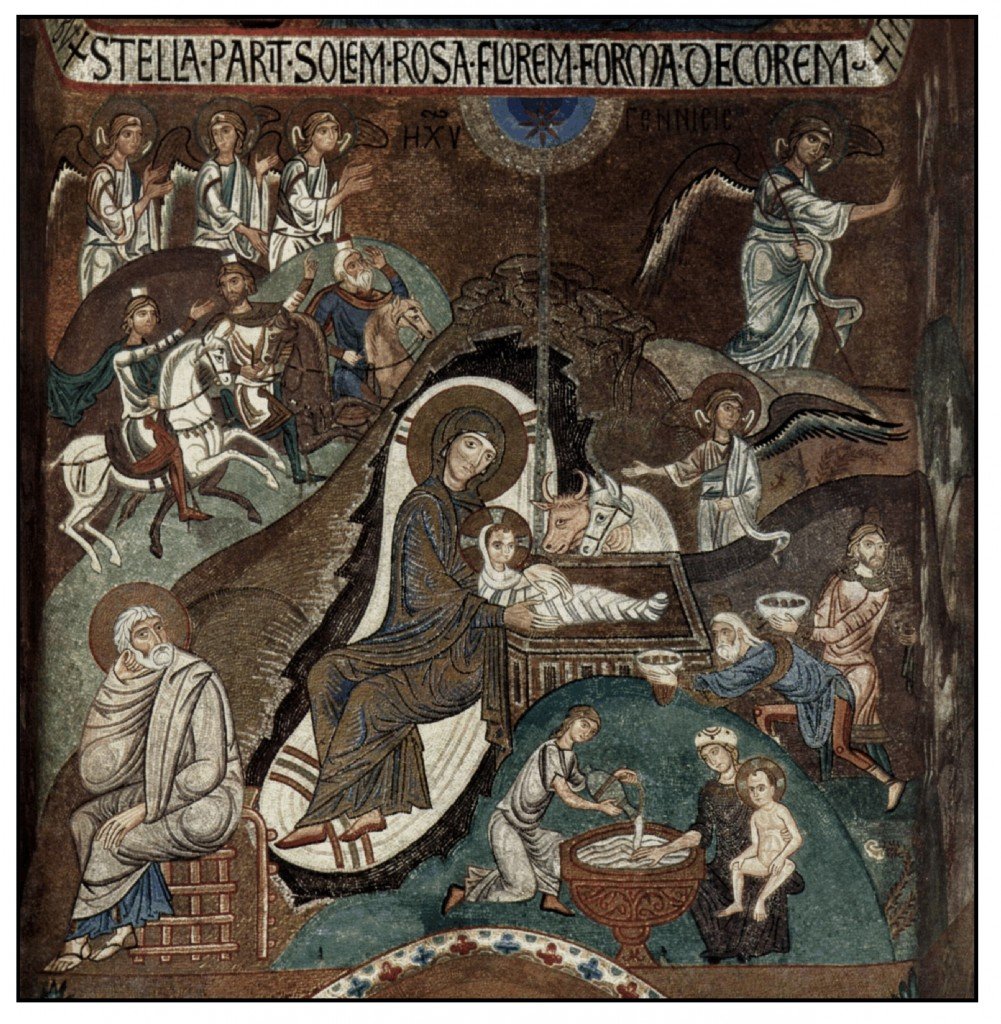 Those images that yet
Fresh images beget.
Yeats Byzantium (1930)

In the early Italian Renaissance Duccio di Buoninsegna painted a small panel of the nativity for his Maesta (“majesty,” usually denoting the enthroned Madonna) in the Cathedral of Siena in 1308. The painting derives from the earlier Byzantine icononography but the figures and their faces are highly natural and individual. Everyone is harmoniously placed in the space around the stable: 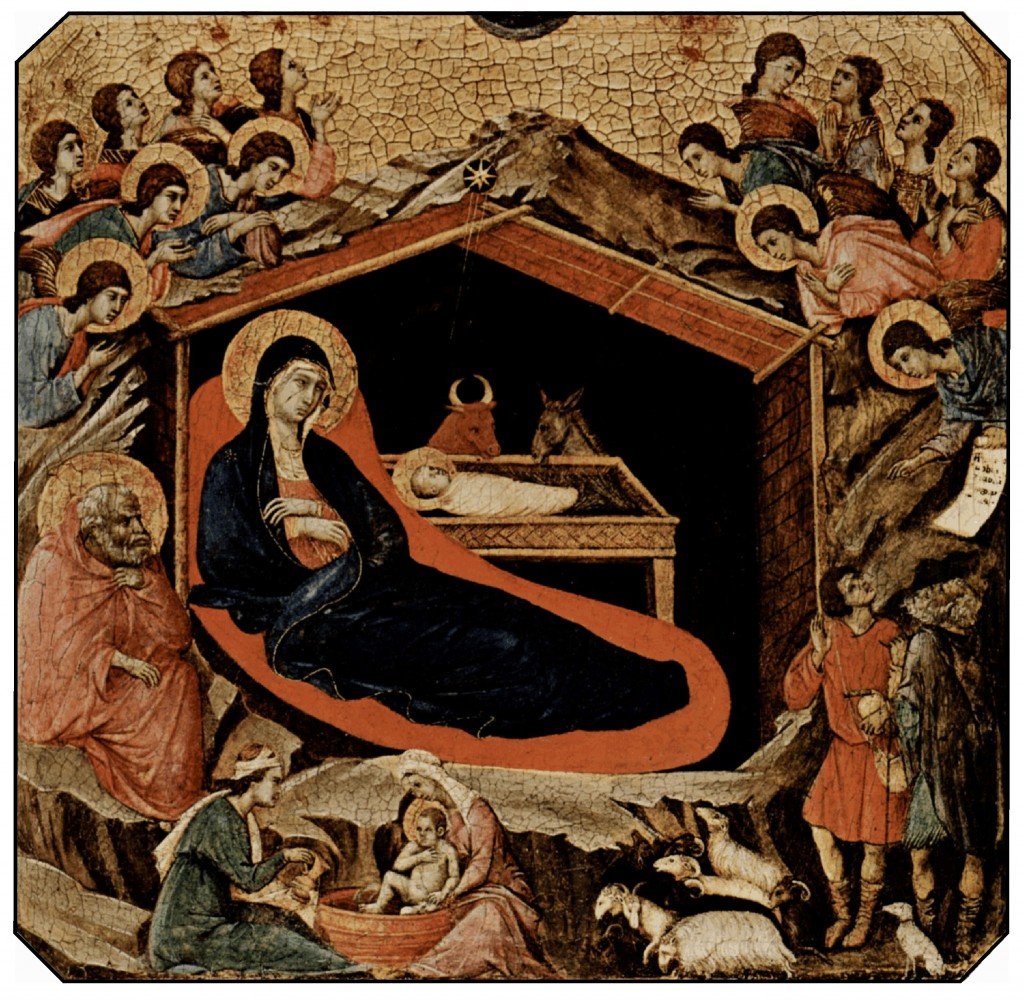 This late Byzantine fresco is from the Church of the Monastery of Mary Peribleptos (“admired by all”) in Mistra, in the Greek Peloponnesos. Painted in the middle of the 14th century, the fresco contains all the elements of the Duccio painting, and adds the visiting wise men. However, the most striking aspect of the fresco is its swirling perspective – the geometry is emotional rather than spatial. The earth is distorted by the divine birth. The painting represents miracle rather than reality: 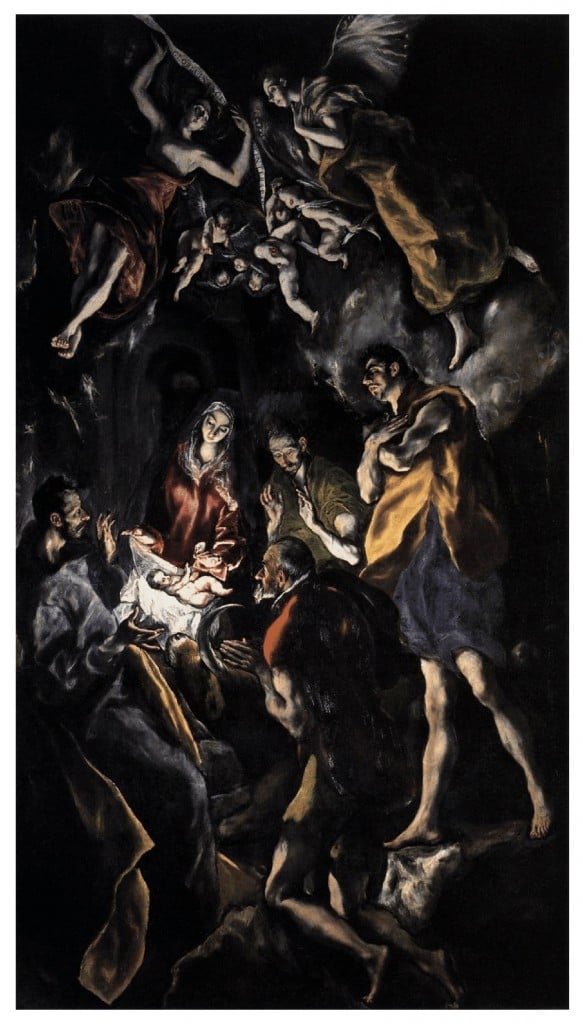 This expressionist style was not seen again until the work of Domenikos Theotokópoulos, known as El Greco (1541-1614). He was born and trained in Crete, and was clearly aware of the developments in late Byzantine art. From Crete, he went to Venice and then on to Rome, finally moving to Toledo, Spain, in 1577. His Adoration of the Shepherds, one of his last paintings, now in the Prado, is similar to the Mistra Nativity in the way that the figures float around the newborn Christ. Everyone is suspended in the darkness and illuminated by the newborn Christ. El Greco’s style was isolated from the main currents of European art. He had no immediate followers. His highly emotional approach to painting did not recur until the expressionist movements of the 20th century.

Art is sometimes more intense at times of great political upheaval. The disintegration of the Byzantine Empire may have precipitated the passions that we see in the surviving art of the late Byzantine period. Italy was also in turmoil: from the 12th to the 15th century Guelph fought with Ghibelline and condottieri waged wars among the dukes.

The play Pentecost by David Edgar looks at the political upheavals that followed the fall of communism in Eastern Europe through the fate of an imagined fresco that perhaps may have been a link between late Byzantine and early Renaissance.  The play touches on many issues. Whether concentrating on past glories overwhelms any hope of solving present problems. Whether the free movement of people from one region to another can be prevented.  Whether politics or religion can ever fully control artistic expression. Yet behind all these issues is the idea of all that must have been lost after the fall of Byzantium. History is notoriously incomplete.