Li Bai (701-762 CE), also known as Li Po, was one of the famous Tang dynasty poets who called themselves the Eight Immortals of the Wine Cup (an irreverent allusion to the Eight Immortals of Taoism). Li Bai wrote prolifically, and over 1000 of his poems survive. Much of his life is mythical, the stuff of novels rather than of history (Elegant, 1997). He was a devotee of Taoism, a fine swordsman, and a great lover of wine. In his youth he served the emperor. After becoming involved in one of the rebellions, however, he was exiled from the court. He then spent much of his later life wandering “beyond the gorges” in the hinterland of Imperial China. Legend has it that he died drunkenly trying to embrace the moon’s reflection in the Yangtze River, but his death was perhaps a suicide. The illustrated portrait (from the Tokyo National Museum) was painted by Liang Kai in the early 13th century. The seal in the upper right corner signals that the painting was owned by Anigo, an important official in the Imperial court of the Yuan dynasty.

Appreciating Chinese poetry requires seeing as well as hearing. The beauty of the calligraphy is as important to the poetry as the music of the words. The poems are therefore difficult to assess without some feeling for the characters in which they are written, since these allude to meanings beyond those directly expressed by the spoken words. This post therefore begins with a few notes on Chinese characters. 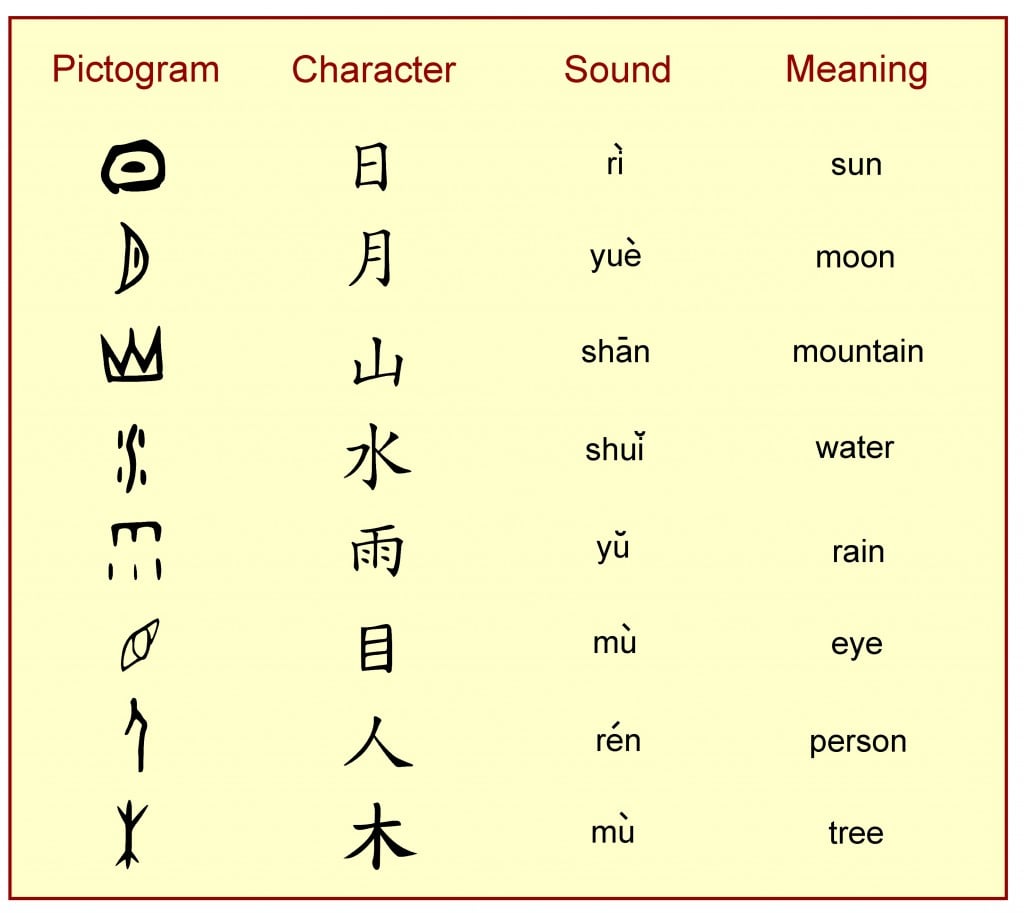 Other characters derive from ideograms (graphic representations of an idea):

In Li Bai’s name, the character Li means “Plum” – a tree on top with many children (blossoms) below. The character Bai means “white” – it originally comes from a pictogram of an acorn (which is white inside).

Chinese poetry has a long history. The Book of Poetry was compiled around 600 BCE. Confucius (551-479 BCE) made it an essential part of the education of a scholar or statesman. By the time of Li Bai court poetry had become quite regular – common forms were an octet or a quatrain of five-syllable lines, with every second line rhyming. The following quatrain is one of Li Bai’s most famous poems. The English translation is by Arthur Cooper and the Chinese calligraphy is by Shui Chien-Tung (Cooper 1973):

Before my bed there is bright moonlight

So that it seems like frost on the ground;

Lifting my head I watch the bright moon,

Lowering my head I dream that I’m home.

Chinese poetry is generally written from top to bottom and from right to left. For simplicity, the following representation of the poem together with the word for word translation presents the characters from left to right to facilitate listening to the sound and following the translations.

The original Chinese for Quiet Night Thoughts is from Zong-Qi Cai’s anthology (2008). The reading of the poem in Chinese (by an unknown reader) is from the sound files associated with the anthology:

The following is an octet of Li Bai that celebrates the joys of drinking by moonlight:

A translation of the poem by Arthur Waley (1919) reads

A cup of wine, under the flowering trees;
Raising my cup I beckon the bright moon,
For he, with my shadow, will make three men.
The moon, alas, is no drinker of wine;
Listless, my shadow creeps about at my side.
Yet with the moon as friend and the shadow as slave<
I must make merry before the Spring is spent.
To the songs I sing the moon flickers her beams;
In the dance I weave my shadow tangles and breaks.
While we were sober, three shared the fun;
Now we are drunk, each goes their way.
May we long share our odd, inanimate feast,
And meet at last on the Cloudy River of the sky.

Chinese poetry has both rhyme and rhythm (Liu, 1962; Cai, 2008). The rhymes often come at the end of every second line (e.g. in Drinking Alone by Moonlight). Rhymes are mainly determined by the vowels, and less related to the attendant consonants.  However, many of the rhymes depend on  pronunciation that was current in the time that the poem was written, and may not always be apparent in the way the poem sounds nowadays. Chinese is a tonal language with the vowels showing unchanging, descending, descending-ascending, and ascending pitches. These changes are represented in the accents above the pinyin transliterations. The first type of vowel has a longer duration than the others. The rhythm of the poetry depends on both the duration of the vowel and the different changes in pitch.

Recitations of the poem Drinking Alone by Moonlight are available in both English and Chinese at Librivox.

The autumn wind is light,
The autumn moon is bright;

Fallen leaves gather but then disperse,
A cold crow roosts but again he stirs.

I think of you, and wonder when I’ll see you again?
At such an hour, on such a night, cruel is love’s pain!

The translation of Chinese poetry is difficult. The first translations of Chinese poetry into a European language were in French by Judith Gautier and the Marquis d’Hervey Saint-Denis in the middle of the 19th Century. These were further translated from French into German by Hans Bethge, who published Die Chinese Flöte (Chinese Flute) in 1907.

Gustav Mahler adapted seven of the Bethge poems for his 1911 song cycle Das Lied von der Erde. The following are excerpts from the beginning of two of the songs, translated from the German to English. The tenor is Fritz Wunderlich; Otto Klemperer conducts the New Philharmonia Orchestra; the recording is by EMI in 1967.

The wine already beckons from the golden goblet,
but don’t drink just yet – first, I’ll sing you a song!
The song of sorrow shall sound out
in laughter in your soul. When sorrow draws near,
the gardens of the soul lie wasted,>
both joy and song wilt and die.>
Dark is life, dark is death.

In the middle of the little lake
stands a pavilion made of green
and white porcelain.
Like a tiger’s back
the bridge of jade arches
across to the pavilion.
Friends sit in the little house,
beautifully dressed, drinking, chatting;
some are writing down verses.

The “translations” are full of mistakes. The line “Dark is Life, dark is Death” (Dunkel ist das Leben, ist der Tod) is an interpolation that fits with the idea of Li Bai’s poem but is not so directly stated in the original Chinese. The porcelain pavilion is actually the pavilion owned by someone named Tao (which can also mean “porcelain”). Bethge called his poems Nachdictungen (recreations). The Mahler Archives has a wonderful website that describes the changes in the translations leading to Das Lied von der Erde.

The first major translations of Chinese poetry into English were by Ezra Pound (1885-1972) in his 1915 book Cathay. At the time, Pound knew no Chinese, and his translations were based on the notes that Ernest Fenellosa, an American art historian working in Tokyo, had made from discussions with two Japanese professors (Mori and Ariga). These notes were given posthumously to Pound by Fenellosa’s widow. Despite his lack of any understanding of the originals, Pound’s translations are true and forceful (Yip, 1969). Most of the poems in Cathay are by Rihaku – the way that the characters of Li Bai’s name are pronounced in Japanese. As well as the hiragana and katakana symbols (hiragana and katakana), Japanese writing also uses many Chinese characters (kanji), but these are pronounced differently from the Chinese.

The following is one of Li Bai’s poems that became famous with the Pound translation. Pound combined the poem with a summary of Fenellosa’s notes that has its own cryptic beauty

The jewelled steps are already quite white with dew,
It is so late that the dew soaks my gauze stockings,
And I let down the crystal curtain
And watch the moon through the clear autumn.

NOTE: Jewel stairs, therefore a palace. Grievance, therefore there is something to complain of. Gauze stockings, therefore a court lady, not a servant who complains. Clear autumn, therefore he has no excuse on account of the weather. Also she has come early, for the dew has not merely whitened the stairs, but has soaked her stockings. The poem is especially prized because she utters no direct reproach.

Night long on the jade staircase, white
dew appears, soaks through gauze stockings.
She lets down crystalline blinds, gazes out
through jewel lacework at the autumn moon.

On jade stairs, the rising white dew
Through the long night pierces silken hose
Retreating inside, she lowers crystal shades
And stares at the glimmering autumn moon.

The story behind the poem is only hinted at. A lady at the palace in love with the emperor finds herself no longer in his fancy. The autumn moon suggests the cooling of their summer passion. The crystal curtains suggest that the scene is viewed through tears. Pound puts the poem into the first person. Though not indicated in the original, this personal point of view accentuates the longing and the regret. Another translation that follows Pound’s use of the first person is available on Mark Alexander’s webpage which provides translations for many different Chinese poems.

Another of Pound’s translations records the story of a young woman, married in youth and innocence, learning to love her husband and finding out that love can bring sorrow as well as happiness.

While my hair was still cut straight across my forehead
I played about the front gate, pulling flowers.
You came by on bamboo stilts, playing horse;
You walked about my seat, playing with blue plums.
And we went on living in the village of Chokan:
Two small people, without dislike or suspicion.

At fourteen I married My Lord you.
I never laughed, being bashful.
Lowering my head, I looked at the wall.
Called to, a thousand times, I never looked back.

At sixteen you departed,
You went into far Ku-to-en, by the river of swirling eddies,
And you have been gone five months.
The monkeys make sorrowful noise overhead.

You dragged your feet when you went out.
By the gate now, the moss is grown, the different mosses,
Too deep to clear them away!
The leaves fall early this autumn, in wind.
The paired butterflies are already yellow with August
Over the grass in the West garden –
They hurt me. I grow older.
If you are coming down through the narrows of the river Kiang,
Please let me know beforehand,
And I will come out to meet you
As far as Cho-fo-Sa.

Li Bai was very musical and many of his poems deal with the sounds of the lyre or the flute. Harry Partch composed 17 lyrics of Li Po in the early 1930s using the translations of Shigeyoshi Obata (1928). He tried to remove the music from the tonality conventions of the Western traditions. The following is one of the lyrics. It is intoned by Stephan Kalm (who provides the flute sounds as well as the words) with accompaniment on tenor violin by Ted Mook. The recording is by Tzadik, 1995.

Whence comes this voice of sweet bamboo?
Flying in the dark?
It flies with the spring wind,
Hovering over the city of Lo.
How memories of home come back tonight!
Hark! the plaintive tune of “Willow Breaking”,p>

(“Willow-Breaking” is the name of a sad folk song.)

Li Bai spent some time in the monasteries that were scattered through the hills of China, and became adept at meditation, or zazen. One of his poems (translated by Sam Hamill, 2000) gives the essence of this process. Jing Ting mountain is near Xuancheng city in the Anhui province of China. Further notes on the poem and a version of the poem in song are available on the webpage of Shirley Yiping Zhang.

The birds have vanished down the sky.
Now the last cloud drains away.
We sit together, the mountain and me,
until only the mountain remains.