The Rise of Ravenna 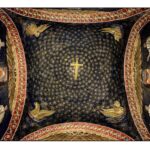 The Disintegration of the Roman Empire

Constantine the Great (reign 306-337) re-unified the Roman Empire and promoted Christianity as the imperial religion. For several decades after Constantine, the Empire remained stable. However, after the death of Theodosius I (reigned 379-395), the Empire fractured into Eastern and Western regions, each ruled by one of his sons.