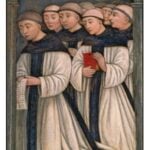 In 1098 a small group of monks left the Benedictine monastery of Molesme in Burgundy to live in the forest of Cîteaux (Latin Cistercium) just south of Dijon. They considered their original home too lax and luxurious, and wished to return to the austere life of solitude, chastity, poverty and manual labor that St Benedict had originally proposed in the 6th Century. They distinguished themselves from the Benedictines by wearing undyed white robes rather than black. Over the next hundred and fifty years, the small monastery founded by these “white monks” at Cîteaux became the center of the Cistercian Order, which linked together over 500 abbeys in Europe, extending from Portugal to Estonia and from Sicily to Norway. The Cistercians were noted for the proficiency of their agriculture, the fervor of their scholarship, and the beauty of their buildings. This post comments on their achievements.