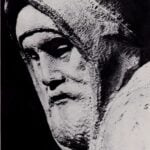 Toward the end of his life, Michelangelo (1475-1564) attempted to sculpt a marble representation of the Pietà – the moment when Christ’s lifeless body is taken from the cross and held by his mother. In this endeavour he was returning to the subject of the sculpture that first brought him fame – the Rome Pietà of 1499. The ageing sculptor was unable to complete his task. One of his efforts – the Florentine Pietà of – he broke into pieces in 1555. A second attempt – the Rondanini Pietà – was still unfinished when he died in 1564.  Both sculptures have an intense emotional power.