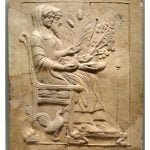 For over a millennium the Mysteries were celebrated at Eleusis, about 18 km northwest of Athens. The main buildings in the temple precinct were built in the 5th Century BCE, but earlier buildings were present in the 6th Century, and evidence of cult-activity at the site goes back to the Mycenaean period before 1100 BCE (Mylonas, 1961, Chapter II). The Mysteries continued through the Hellenistic and Roman ages until their demise in the 4th Century CE when Christianity became the dominant religion of the Roman Empire.

What happened during the Mysteries is unknown. Those who were initiated into the Mysteries were instructed not to reveal their secrets. All we know is that they provided their initiates with a vision of the divine and a way to cope with death.