Thoughts on the Kaballah 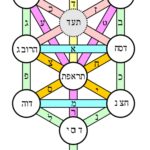 The Kabbalah is a body of Jewish thought based on mystical insight into the nature of God and an imaginative interpretation of the Torah. The word itself means “received.” According to legend this special knowledge was imparted by God either to Adam in Eden or to Moses on Sinai, and handed down thereafter from generation to generation to an enlightened few, who preserved the received wisdom and taught it to their students. This post presents some thoughts about the Kabbalah from someone who, though neither Jewish nor fluent in Hebrew, is fascinated by the intricacy of its ideas.