Stones of the Picts 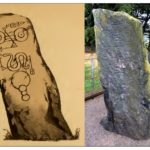 With my surname it is inevitable that I should become interested in the Picts, a people who lived in Scotland during the first millennium of the Common Era. They left behind many sculptured stones, which now stand in fields and churchyards in the Northeast part of Scotland. Together with the Scots, the Vikings and the Anglo-Saxons, they became the people of Scotland.