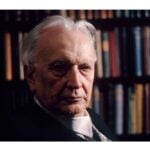 In his 1949 book Vom Ursprung und Ziel des Geschichte (translated in 1953 as The Origin and Goal of History), Karl Jaspers proposed that the millennium before the time of Christ (or more specifically 800-200 BCE) could be considered an Achsenzeit or “Axial Age.” During this period, in five isolated regions of the world (China, India, Persia, Israel/Palestine, and Greece), human society and thought changed radically and irreversibly. A world that had until then been understood in terms of legends (mythos) was now examined in the light of reason (logos). During this time, “hitherto unconsciously accepted ideas, customs and conditions were subjected to examination, questioned and liquidated.” A multiplicity of gods and demons ceded their power to one universal god or life force. Sages, prophets and philosophers proposed rules for how we should behave. Though the axial age passed long ago, we still return to these teachings for moral guidance.