Condemned to be Free 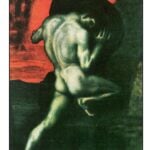 When Paris was liberated in August, 1944, everything was possible. A new world needed to be created to protect their  regained freedom. The philosophy that epitomized this desire for freedom was “existentialism.” The term, originally used in a derogatory sense to characterize those who followed the philosophical concept of the primacy of “being,” was grudgingly accepted by Jean-Paul Sartre and Simone de Beauvoir as a description of their thinking. Existentialism fitted easily with the idea of the absurd proposed by Albert Camus. These concepts became the main focus of both art and philosophy in the decade that followed the end of World War II.