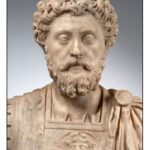 Marcus Aurelius (121-180 CE) is one of the most famous of the Roman Emperors. Some of his renown is related to the many representations of the Emperor that have persisted to the present day: the Aurelian Column documenting the Marcomannic Wars he waged on the Northern frontiers of the Empire; the bas-reliefs that were initially mounted on a triumphal arch in Rome, and later preserved when the arch was destroyed; and the equestrian statue that, from the Renaissance, was displayed in Rome’s Piazza de Campidoglio on a pedestal designed by Michelangelo. Most of Marcus’ fame, however, derives from the book that he wrote during the many years when he campaigned against the Germanic Tribes who threatened to cross the Danube and invade the Empire. This book, which has come to be known as the Meditations, presents a philosophy that derives from Greek Stoicism: to live each day as if it were one’s last, to act in accord with nature, not to become upset by whatever happens, and to help others as best one can.